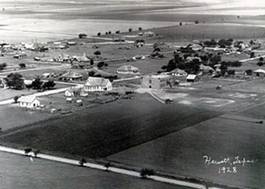 Hewitt History in a Capsule
The Missouri, Kansas & Texas (MKT or Katy) was the first railroad to enter Texas from the north after the Civil War. It ran across the Indian nation and into Texas via Denison in 1872. In 1882, a station was established six miles south of Waco.

John Allison Warren bought the township that developed around the rail station from John Blydenburgh for $4,911.64 in 1893. Warren named the township Hewitt, after a director of the Katy Railroad. He named the first street Warren and the second street Johnson (his wife’s maiden name) both of which still maintain these names.

Hewitt Lumberyard & Railroad
Warren later put in a lumberyard. The story goes that he would give a piece of land to families if the lumber for the house built on it came from his yard. Early families acquiring Hewitt lots and acreage from John Allison Warren were:

During the first 90 years, Hewitt was a farming community. The city was underlain by a strip of Austin chalk several miles wide, which outcrops in Eddy and runs through Lorena and Hewitt. This chalk weathers into rich black soil and becomes the Blackland Prairie. Cotton, cattle, and corn thrived. Cotton was sent to Waco in wagons or shipped out on the “Katy.”

The railroad continued to bring prosperity to Hewitt. By 1912, there were several businesses including a bank, a cotton gin, a lumberyard, and two general stores. The bank was liquidated in 1916 and Hewitt did not have a bank again until 1980. Currently, there are two banks, two credit unions, a brokerage house, and other businesses and professional people in Hewitt. The U.S. Post Office was opened in 1884. 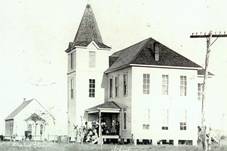 Schooling in Hewitt
In 1890, a subscription, or pay school, was opened. A common school district was created in 1893, and all grades met in one building. New schools were built in 1902 and 1921. Hewitt and South Bosque consolidated in 1947 to form Midway Independent School District, which currently consists of a high school, a middle school, two intermediate schools, and six elementary schools with a total enrollment of over 7,500 students.

Hewitt has the oldest continuous weather reporting station in Texas. It was officially begun in 1879 by Isham Harrison Earle; however, unofficial records date the station back to 1870. The weather station was later taken over by Earle’s daughter Hallie Earle, M.D.

Dr. Earle was the first woman to practice medicine in Waco. She graduated from Baylor Medical School in Dallas and was licensed in 1907. She continued to live in Hewitt and drove to her office in Waco.

City Water & Incorporation
The city water system was started with one artesian well and a large storage tank in 1899 by D.L. Chapman. His son, E.R. Chapman, took over the operation of the water company until selling it to Chester McLemore, who sold it to the city in 1985. Today the water and sewer system consists of five wells, three connections to the Waco Water system, 73.5 miles of water lines, and 60.4 miles of sewer lines.

Hewitt was incorporated on June 25, 1960, with a vote of 73 for and four against. George C. Baxley was elected mayor and council members were: M.B. Weatherby, Homer C. Warren, W.A. Gruetzner, W.H. Hyman, and W.E. Wollard.

Through the years Hewitt became McLennan County’s second largest municipality. It has still retained its identity as a distinct community even though it is located close to Waco. The Warrens, Earles, Chapmans, Attaways, Trices, and other old timers, both living and dead, have welcomed the newcomers and rejoiced in the newfound life and activity in Hewitt.