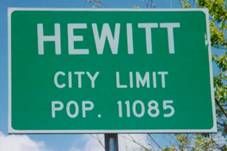 History of Growth
The City of Hewitt has a history of growth. In fact, the city was rated the fastest growing community in the United States during the 1970’s. Since Hewitt’s population boom, it has continued to grow at a steady rate. Please examine the city’s population growth pattern in the table below.